Green Dot is a primary prevention strategy aimed at reducing power-based personal violence by targeting all community members as potential bystanders. In 2011, CALCASA partnered with Green Dot etc. Inc. to launch the program at eight pilot sites throughout California. The pilot sites have received training, worked on community assessment and internal capacity building to prepare for their implementation, which will start during the 2011-2012 school year.  The pilot sites are: 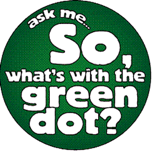 Green Dot seeks to engage these bystanders “through awareness, education, and skills-practice, in proactive behaviors that establish intolerance of violence as the norm, as well as reactive interventions in high-risk situations — resulting in the ultimate reduction of violence.” Green Dot is built upon the premise that a culture shift is necessary to eliminate violence in our communities. In order to create this culture shift, Green Dot focuses on identifying early adopters, or popular opinion leaders, in various settings (i.e. high schools, colleges, community groups) and providing them with the tools they need to intervene when they witness acts of power-based personal violence. Green Dot establishes the new norm of integrating prevention into daily activities and personal relationships. By targeting these key community members, this new norm will diffuse throughout the rest of the community’s population.